出處：March 18 in the journal Pediatrics. 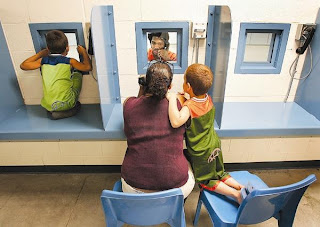 When Mom or Dad Is in Prison

(dailyRx News) Having a parent in prison can mean hardships for the entire family. But those challenges may not go away when the parent is released. There may be long-term consequences for the kids.
A recent study found that children are more likely to have physical and mental health problems as adults if their parents had been in prison.
The risk was higher for mental health issues than for physical health issues among children of incarcerated parents.
However, even physical conditions such as high cholesterol, asthma and migraines were more likely among adults whose parents had been in prison.
"Keep all scheduled medical appointments."
The study, led by Rosalyn D. Lee, PhD, MPH, of the Division of Violence Prevention at the Centers for Disease Control and Prevention, looked at the long-term physical and mental health of kids whose parents served time in prison.
The data included responses from the National Longitudinal Study of Adolescent Health, which tracked 14,800 participants from grades 7 through 12 and then on into early adulthood.
In each of the two survey follow-ups among those whose data was used, participants were about 15 and 28 years old at the first and second survey times.
The teens and young adults were asked whether either biological parent had "ever spent time in jail or prison." Then, in the second survey, the participants were asked if a doctor, nurse or other healthcare provider had told them they had one of a number of different health conditions.
The researchers identified eight different health problems, out of a total of 16, which appeared significantly linked to a parent's incarceration.
Children who had had imprisoned parents were more likely to have depression, post-traumatic stress syndrome, anxiety, high cholesterol, asthma, migraines, HIV/AIDS and generally poor or fair health as young adults.
Only a small number of the overall sample had HIV/AIDS, so it's not clear how strong the association is for that condition.
Specifically, young adults whose parents had been incarcerated were about 50 percent more likely to have had anxiety and were about 40 to 60 percent more likely to be depressed (depending on which parent was in prison).
The researchers adjusted their findings to account for the race/ethnicity, gender, educational level and birth country of the participants. The calculations also accounted for whether the participants had been abused in any way, their family structure, their parents' levels of education, whether their parents were alcoholic and whether their parents received public assistance.
The researchers also looked at whether the links to health issues varied for mothers versus fathers who had been incarcerated. Kids whose mothers were in prison were only more likely to have depression.
Kids whose fathers were in prison were eight times more likely to have at least one of these mental or physical health problems as young adults. The risk for mental health issues was a little higher than for physical health issues among those whose fathers had been in prison.
The researchers said other studies suggest that "underlying mechanisms that link parental incarceration history to poor outcomes in offspring may include the lack of safe, stable, nurturing relationships and exposure to violence."
More study is necessary to understand the possible explanations for the link more thoroughly.
The study was published March 18 in the journal Pediatrics. The research did not receive external funding, but the researchers used a data set funded by the National Institutes for Health. The authors reported no conflicts of interest.